General informations about Budapest
The capital of Hungary is situated along the Danube, in the heart of the Carpathian basin. Hilly Buda, which comprises one-third of the city’s area of 525 km² is located along the right bank of the Danube surrounded by low mountains. János Hill, with its 529 metres is the highest summit of Buda. Across the river sprawls flat Pest. The geology of Budapest has played a determining role in the city’s life over the course of history. Hot springs breaking through limestone mountains supplying water of 35-76 degrees centigrade gave rise to a flourishing culture of spas in the Roman Age and made Budapest one of the most popular spa cities of Europe.

The population of Budapest is about 1.774 million, 17% of the country’s population. Women contribute more than half, 54% of the population.

The number of hospital beds per ten thousand people is 124. The average length of stay in health care institutions is 9.4 days per year. The level of use of hospital beds is 88.6%. A family practitioner has an average of 1,323 patients. 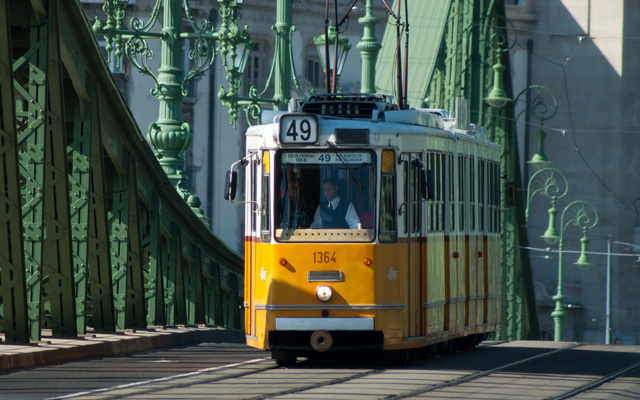 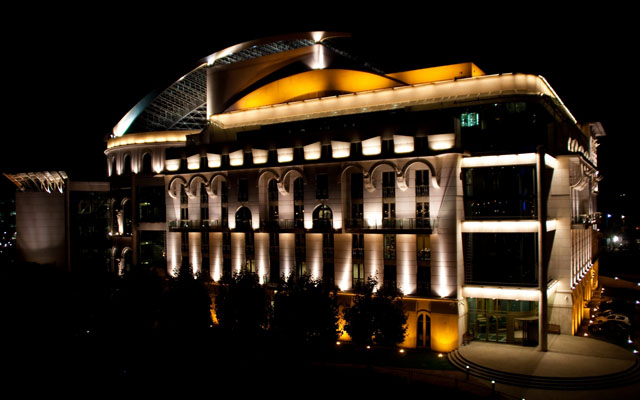 The National Theatre by night
The city leaders consider it their fundamental task to make Budapest a liveable and pleasant city. A place where local people and visitors can find a variety of leisure activities and entertainment. In recent years the lively café life that had characterised Budapest in the early 20th century has also been rekindled. Walking around the city, visitors are lured by a multitude of cafés and restaurants with terraces, particularly in the increasing number of pedestrian zones. A favoured entertainment area is Liszt Ferenc Square and its vicinity, and renewed Ráday Street.
The cultural life of Budapest would be inconceivable without buoyant nights in the theatre. Many of the renowned old theatres have been remodelled over the past few years including the Operetta Theatre and Thalia Theatre. In 2002 the National Theatre, demolished in the 1960’s, was rebuilt on a new site. Szabó Ervin Central Public Library had also undergone spectacular renewal and expansion which was accomplished in 2001, making it one of the largest and most moderns public libraries in Central Europe. Renewal of the network of branches has also been started recently. 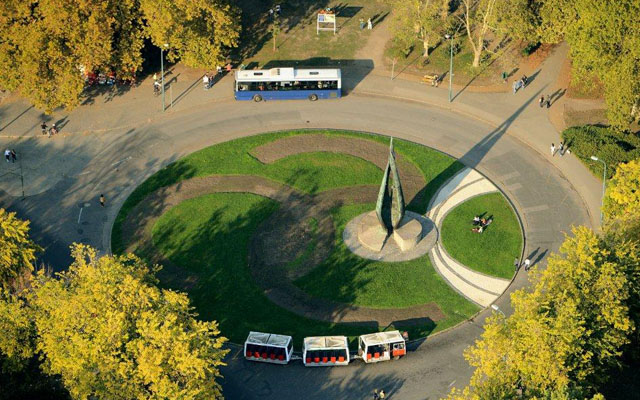 The Centennial Memorial on Margaret Island

Parks and green areas are the most popular places of recreation. Of the total area of Budapest 13.4% is forest and 2.3% is parks. Margitsziget, or Margaret Island is one of the most popular places of recreation. From spring to autumn, hundreds of people visit the island to find rest or active recreation among its trees and bushes. Surrounded by the Danube, the island’s 5.3 kilometres circumference is eminently suitable for running, jogging or cycling.
The City Park on the Pest side hosts several major events every year. Created originally to serve as a site for the Millennium Celebration in 1896, the park near downtown Budapest offers entertainment to local people and visitors alike with its monuments, ponds, outdoor restaurants and cafés. Its lanes and alleys and open spaces are is also favoured by sport lovers: cyclists, roller skaters and joggers. 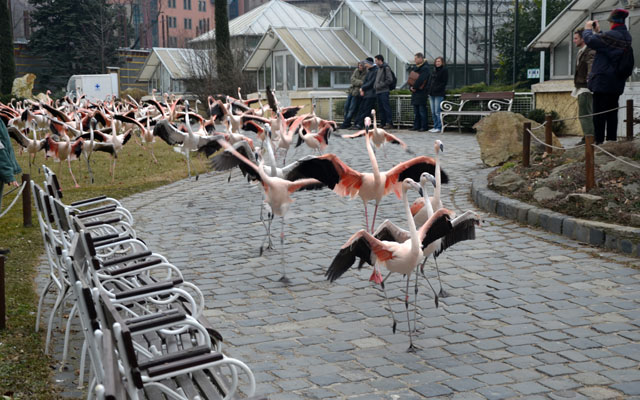 The traditional run of the flamingos in Budapest Zoo
The Zoo is a favourite place of entertainment of both locals and visitors. Boasting many buildings preserved as monuments, the Budapest Zoo launched a major reconstruction project in the mid-1990’s which has been going on to date. As a result, the old buildings regained their original splendour and the number of visitors has been continuously increasing. The designers pay special attention to providing